The next morning Dan, Ivan, Anneloes and Fay went off for an early game drive and I stayed behind to sorted out a few bits and pieces not quite right with the packing arrangement in the Beast. (It would take me almost a week of fiddling with the boxes and equipment, moving things around so that the most used things got priority at the top of boxes and easily accessible places – clearly remnant of some childhood tetris addiction).

I continued on along to Voi gate where I added some more money to my safari card and bumped into Dan and Ivan, back from their early morning drive and attempting to do the same. Amazing what a process it is adding money to these cards.  It’s a bit like having an Oyster Card in the UK, but not as swift.  We we were all there almost a full hour… You can’t enter the parks without enough credit on your card – supposedly to reduce the accepting of hard cash at the gates (it’s reasonable to assume the KWS cottoned onto the fact that the number of visitors didn’t add up to the amount of cash in the till at the end of each month…)

I took the scenic route, a stretch of road heading north, parallel with the main road, up toward Mudanda Rock. A 1.6km single hunk of rock, it which acts as a water catchment and has an enormous dam below it. I and stopped to take a look. One single giraffe stood splayed legged at the distant edge with it’s head dipped in the water. The lack of animals didn’t detract from the view though and I took a few selfies (one drawback to traveling solo). The road down to Manyani Gate
was awesome, with the earth dropping away to a vast plain of yellow grassland, and opening itself up to tons of wildlife. I joined the main road and entered Tsavo West at Tsavo Gate a little further down the road.

Does my bum look big in this?

KWS lady at the Tsavo West gate, “You alone?”, I look over my shoulder (again), ensure there really isn’t someone I’ve forgotten (still), and shrug, “I guess so”.  Eish her bosom bounced up and down as she laughed in disbelief and waved me through…

Tsavo West is dense in bush and shrub so animals are a lot more difficult to spot. The scenery however, changes every five minutes and is completely different and dramatic. I found myself resisting the urge to take photos around almost every bend. Sadly, I have completely mistimed this day. My accommodation for the night was right over the other side of the park and I had planned a route passed some significant points of interest along the way, which followed a slightly less direct route, past a massive waterhole (nothing) and up to Roaring Rocks lookout which was almost a 360 degree view of the land below. I drove on past the usual suspects, antelope, zebra and a few elephant but the land is just so think with bush. Probably find I drove past tons of herds and troops who all spotted me and the Beast instead – game viewing in reverse. 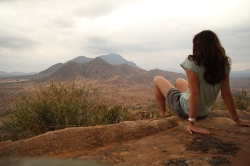 I spot a Beast 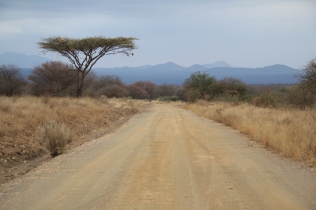 With dusk drawing closer, I had one spot I wanted to see before heading to my room for the night Mzima Springs – a small oasis of perfectly clear water that rises up from the Chyulu Hills and produces 250 million litres of water per day, most of which heads downstream to Mombasa. My run with crappy animal spotting didn’t change much and I failed to see one of the many hippos or crocs that reside in this spring…  I did sit and look at some fish in the underwater viewing chamber which was quite cool.

My room for the night was a cute rondavel at Kitani Bandas, a more affordable little camp a stone’s throw from it’s the luxurious counterpart, Severin Lodge. My ‘room steward’ Alex showed me the ins and outs briefly, mentioning that I should let the water in the shower run for a bit as it needs time to warm up. Well I stood naked and goose-bumpy in that shower for a good 8 minutes before giving up on the hot water and taking a quick 2 minute scrub down under cold water… Africa’s not for sissies.

I decided to dine at Severin Lodge to indulge in the luxury of wifi, good food and wine. Drove down the road in the dark and on pulling into the car park, a fair distance from reception  (bare in mind these camps are unfenced), was greeted by a Masaai who suddenly materialised from the dark of night, teeth was all I saw. He was in full get-up, spear and all, and his sudden manifestation scared the living shite out of me. He laughed, apologised and made polite small talk before walking me by torch light to the reception area  (personally, I think he gets a kick out of that and does it to all new guests, ensuring that his tribal stalking through stealth abilities are still in tact).   I went back the next morning for a cup of coffee and heard that during the night, lions had snuck into camp and completely torn apart one of the loungers outside a luxury hut – justifying my freakout with the Masaai man.  Africa’s not for scardy cats…

The staff at Severin were amazing, their English impeccable and their manner with guests incredible. I went back the next day and was greeted by name at least two of the staff – that’s touching. Dinner was a four course menu of the finest foods – the small but delicious kind. Dining by myself, I do feel a bit spare at times but the Planet often feels Lonely too, so this resourceful book accompanies me to dinner at times.  As I’m driving much of the day, I don’t get to research for the day ahead and so dinner’s often a good time to get stuck in. This night I ate under the stars, with my flickering candle, seat facing bush-ward towards the spot lit area. The chef even came over for a little chat to see how I’d enjoyed his food – top service! 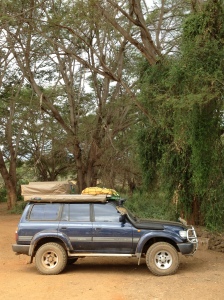 The plan was to go to bed fairly early and wake up before sparrows to do a quick game drive and then join the 10am Amboseli convoy from Chyulu Gate. Well it seems my phone battery died sometime during the night and I woke up 10 minutes to the 10am checkout / convoy time!  I’d slept for almost 11 hours straight!  Clearly wasn’t going to make the 10am convoy then, and would join the next one at 2pm… I took a lengthy game drive and made my way over to Chyulu for 2pm to join the last convoy of the day only to be told that there weren’t any other cars going.  I would be a convoy of one, and would I like an escort?  Shame man, now this escort (AK47 accessorized) would come all the way to Amboseli only to have to mission the way back again (how, I don’t know.  There are no busses really so I guess he’d have to wait to come back the other way with someone else in my situation and heaven knows how long he’d be waiting at the other end – I didn’t pass a SINGLE vehicle going my way or the other way to Amboseli!).  So I politely refused on pity grounds.  AK47 man was also very short on English, and in response, my Swahili is woeful at the best of times, so can you imagine the 2-3 hour silence – no thanks… I love to sing, at full throttle whilst driving and his presence would rob me of this vocal freedom.

Driving out the gate and on towards Amboseli you pass the Shetani lava flow, a 50km squared area of black volcanic rock – pretty awesome and very black. 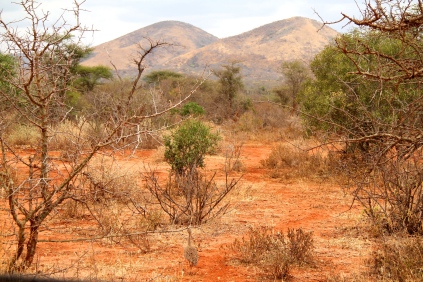 The road up to Amboseli was hectic with corrugations, and took around 2 hours. With dust flying up behind me, I passed local Masaai villages and had to wait for dusty bovine trains to cross before I could continue on with my journey. At one village a boom halted my progress. I sat in the car not knowing what to expect when I saw an armed soldier beckon me over to a small wooden hut next to the side of the road. Hopped out the car and went over. Friendly greetings didn’t seem to be his cup of tea.

“You alone?”, I look over my shoulder, ensure there really isn’t someone I’ve forgotten (still), and shrug (yet again), “I guess so”.

“You can’t pass”, he informs me with eyes dark and yellow, “All vehicles must pass me by 2 o’clock and it’s 5 o’clock now”.
Well I laughed, and then quickly stopped when I realised he wasn’t the joking kind. My tone a little more serious now, “But the last convoy only leaves Amboseli 50kms down the road at 2 o’clock, and by the way, it’s only ten past four”.
“Where is your escort?”
“I don’t need an escort.”
This was his little window for a chance of me ‘parting with something’…
“Where do you come from?”
“Tsavo West” (thought we’d established this…)
“NO, which is your country?”
“South Africa.” (I’m positive they think people from the UK are all millionaires so I avoid telling them I’ve actually come in from England – South Africans are Africans and therefore must be slightly less well off)
“What have you brought me from South Africa?”
“Hmmm, nothing.” (honestly had nothing to give the man, other than the cash bribe he was after)
He kept me there, took my details and continued to ask what I had brought him from South Africa. I didn’t have a thing… After 5 minutes of being completely difficult and wasting my time…
“Go and buy something from those people there”
I looked around to the three local Masaai hanging around my drivers side door.
“But I don’t want anything today thanks”
“You go buy or you won’t pass”

So I purchased a KES2000 (£15!!) bracelet for KES500 from an old Masaai lady with stretched earlobes and the boom was finally lifted. 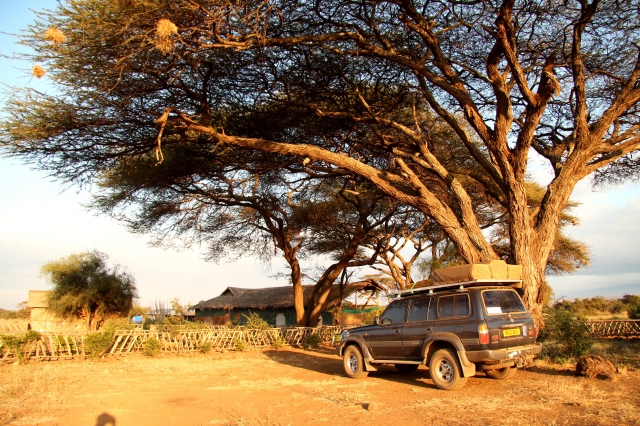 Kimana Campsite was where I was headed and I arrived at around 5pm, too late to enter Amboseli for the day, so I set up camp in this pretty stark campsite. I spent at good amount of time trying to clean the inch of dust the outside of the Beast and tent before opening it up. (When you’re the one washing your own clothes by hand, you do everything possible to try to keep the few items you have clean!). I even wiped down the inside dash and back-end boxes which, after 3 days of chasing round the bush, were all covered in a fine layer of dust. Leftover meat from the braai in Tsavo made for great steak and cheese sandwiches. and I hit the sack at 9pm, keen to get going early the following day and see Kili looming above in the morning light…

← Broken Buckets and the Joy of Coincidental Reunions – Shimbas and Tsavo, Kenya
Hide and Seek with Kilimanjaro – Amboseli, Kenya →