Broken Buckets and the Joy of Coincidental Reunions – Shimbas and Tsavo, Kenya

After stocking up with last minute snacks and food at Nakumatt for my 4-5 day game drive, I headed down the long sultry coast road of Diani. Past the ladders above the road for the Colobus monkeys, the dreaded unannounced speed bumps, Shakatack and the sign down to Forty Thieves – how does one grow to love a place so much after such a short stay?

The earth up at Shimba Hills is a stunning red colour and the forest feels like it’s on top of you at times.  It’s just spectacular. Rolling along the red track, taking in the views as the road winds it’s way through the hills and villages, past some farmers fields and livestock along the way then CRACK… I nearly jumped out of my frikkin skin! It sounded like lightning, but the windscreen was suddenly covered in water (like he heavens had opened up, but just over my car, in one truckload of water). I realised my 50l shower bucket on top of the roof rack had come loose, fallen forward onto the windscreen and smashed. I’m so fortunate the steel tap didn’t shatter or even crack the windscreen (this Beast is a toughie).

I stopped the Beast and got out to check the damage… my shower had most definitely kicked the bucket… At this point, a truckload of locals pulls up over the horizon from behind. The driver starts shouting at me with his hands in the air, annoyed at having a vehicle in his path. I pointed slowly to my broken bucket, gave him sad eyes, and toed the area where the water had soaked into the earth (there was a full on river!). The driver’s tune changed when he saw my misfortune, and pitiful cries of “pole” were heard from the traveling onlookers as the truck rolled slowly by.

“Pole pole” is the Swahili word used for “slow”, but at this moment in time I realised that “pole” (in singular form) must be the term used for “ag shame”.

The drive through the Shimba Hills was magnificent, it’s so lush and beautiful. I carried on through a couple of small villages, waved at the passers by, old men on bikes, children walking along in groups, herdsman… but no one waved back. Then it dawned on me that my side windows were tinted and that they couldn’t see my enthusiastic greeting. I made a mental note to wave from the windscreen area in future. 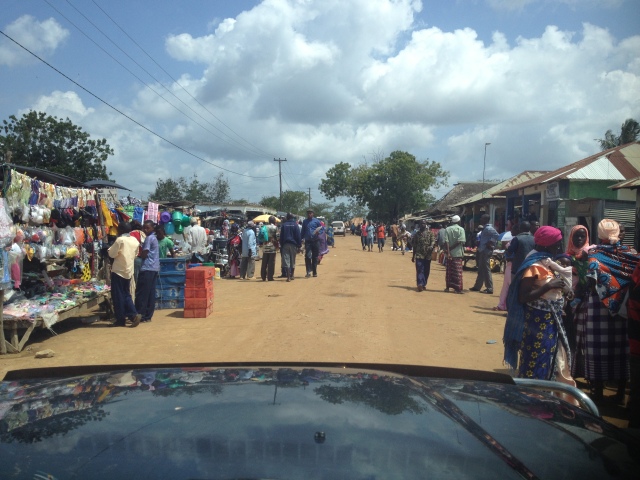 Villages on the way to Tsavo

I turned left at the end of the dirt road and made my way up onto the Mombasa-Nairboi road (the section on driving this road just about needs an entire post for itself). The driving in Kenya (as mentioned previously) is pretty horrendous and this road, in particular, serves as the only route for ALL import and export for the whole of East Africa. The railway line for cargo is just about non-existent so everything arrives and leaves by truck – every single goddamn container-baring one of them, heading up and down this road…

Driving this road takes nerves of steel, eyes in the back of your head, timing, advanced driving skills and a massive helping of pure luck. It really is a matter of leap frogging your way around the caravan of trucks, with each overtaking opportunity resembling something like this…

Talk about a crash course (!!) in East African driving…

I turned off the road at Buchuma Gate at the southern point of Tsavo East. A buffalo skull welcomed me at the gate and the lady behind the counter took some time to absorb the fact that I was indeed on my own and wasn’t hiding a small companion in my cruiser.  Maybe they get lots of cheapskates trying to get into the parks for free (which isn’t without just cause at $65-$80 per person per day).

I have had this many times over since… “You alone?”, I look over my shoulder, ensure there really isn’t someone I’ve forgotten, and shrug, “I guess so”.

I drove up the hot and dusty track towards Aruba Dam with not much game on the way. I did spot some elephant in the distance and, as you tend to do when on your first game drive after a leave of absence, shot around 20 photos of the reddy grey lumps in the distance. Aruba Dam was dry which was a bit of a disappointment as the guide book had really bigged it up. I took a smaller road down next to a river and saw more elephant, a little closer this time (cue another 30 snaps of distant reddy grey lumps). The sun was hanging low in the sky so I pressed on to the public campsite for my first real night of camping. Stoked to finally have the opportunity to camp out in the bush with no one about (I didn’t pass a single car the whole day!), I drove into the almost desolate (but for one other bakkie) campsite.  I was leaning, elbow out my window, reading the do’s and don’ts on a signboard when from the bush I heard my name being yelled. Could this be the sad deluded voice of loneliness calling me in my head? I turned to where I thought the voice had come from, lifted my sunnies and squinted to get a better look.  Running towards my car is none other than Dan Sorrell (my fellow Saffa and total trouble maker from Mombasa Backpackers)! 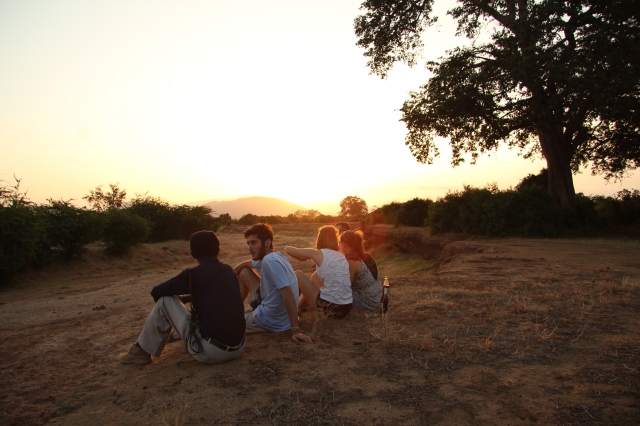 Sundowners with friends in Tsavo East

TTC 5: I had no idea Dan was planning on coming to Tsavo, he had no idea I was either.  We had said our tearful goodbyes days earlier in Mombasa… I was there for one night and one night only, and we were the only two cars in the campsite.

Dan was camping with Ivan, Anneloes and Fay so I came over and set up camp near them. We had sundowners in a dry river bed accompanied by a guide who Ivan chatted away to happily in Swahili.  Watching the sun dip below the horizon whilst sipping on Patron – what a way to end the day! We had a braai in the presence of the Captain until the early hours of the morning. Awesome first night!  If only I could have a chance bumping into of friends every night on my travels, I’d be so chuffed! 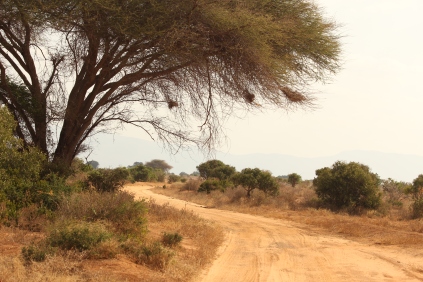 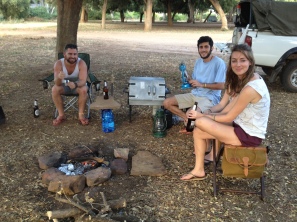 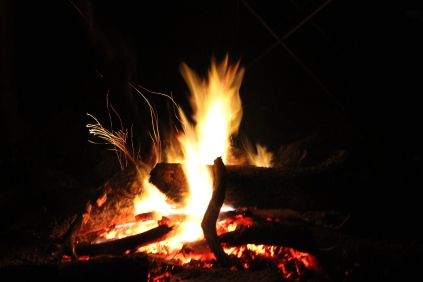 ← Partying in Mombasa and Retreating to Diani, Kenya
Declining Escorts in Tsavo, Kenya →

2 Comments on “Broken Buckets and the Joy of Coincidental Reunions – Shimbas and Tsavo, Kenya”